THE BIRTH OF NEW GOLD

THE BIRTH OF NEW GOLD

Hello, I am Duarte Vizcaino, Bitcoin Trust´s cofounder. Today I would like to share the results of a dream come true with you. Today, I invite you to be a part of a wonderful vision that began in 2012; in which I decided to stop my professional career in order to search for an option for income that would allow me to obtain the necessary resources to be able to sustain our humanitarian foundation.

And like the saying says “He who searches, shall find”

Thanks to a friend, I found Bitcoin, which in the moment cost $15.00. It was in that moment that I began my studies on blockchain. Two years later, I was working full time as a crypto trader. I managed to create an academy that educated thousands of people in the United States and Latin America in this market. I had the privilege of being one of the first successful crypto traders.

In 2014, after having studied the different cryptocurrency projects, such as: Bitcoin, Ethereum, Litecoin, Ripple, Dogecoin, Lisk, etc. I saw a need for the existence of a cryptocurrency with an ecosystem directed at global commerce. One that focused on providing technological advances that blockchain delivers; and through this, joining blockchain and commerce on all levels.

This new cryptocurrency with its ecosystem, would grant governments tools for transparency, efficiency and order in the different state ministries. For example, transparent elections in real time, tamper-proof and incorruptible with blockchain as its base. It would also grant national and transnational companies an automation, security, speed, order and simplicity in operative processes. In a similar manor, blockchain would give small businesses such as clinics, lawyers, pharmacies, schools, supermarkets, etc. the same benefits.

In that moment, the advances in the crypto world were still in diapers. We did not have the technology to develop this vision. And the cryptocurrency projects that had been created up until that moment did not count on the technological development that would permit an efficient scalability through the years for a project like this one. It was a time for trial and error.

In 2014 we started a process to study and investigate blockchain. I formed a work team with young people, whose advanced blockchain studies we covered. We give and participate in seminars, classes and conferences on the subject. We made strategic alliances with professionals in this field that joined the vision. We exhaustively studied the weaknesses and strengths of other cryptocurrency systems and we began to develop the ecosystem for the most technologically advanced cryptocurrency on the market.

Each detail was built with dedication, from the creation of the initial logo, the market study that would show us in what areas we would develop, the MVP (minimum viable product), the technical and technological details that the currency would have, the distribution model, the periods of development and the creation of the technology that will accompany the ecosystem, like Smart Contracts. 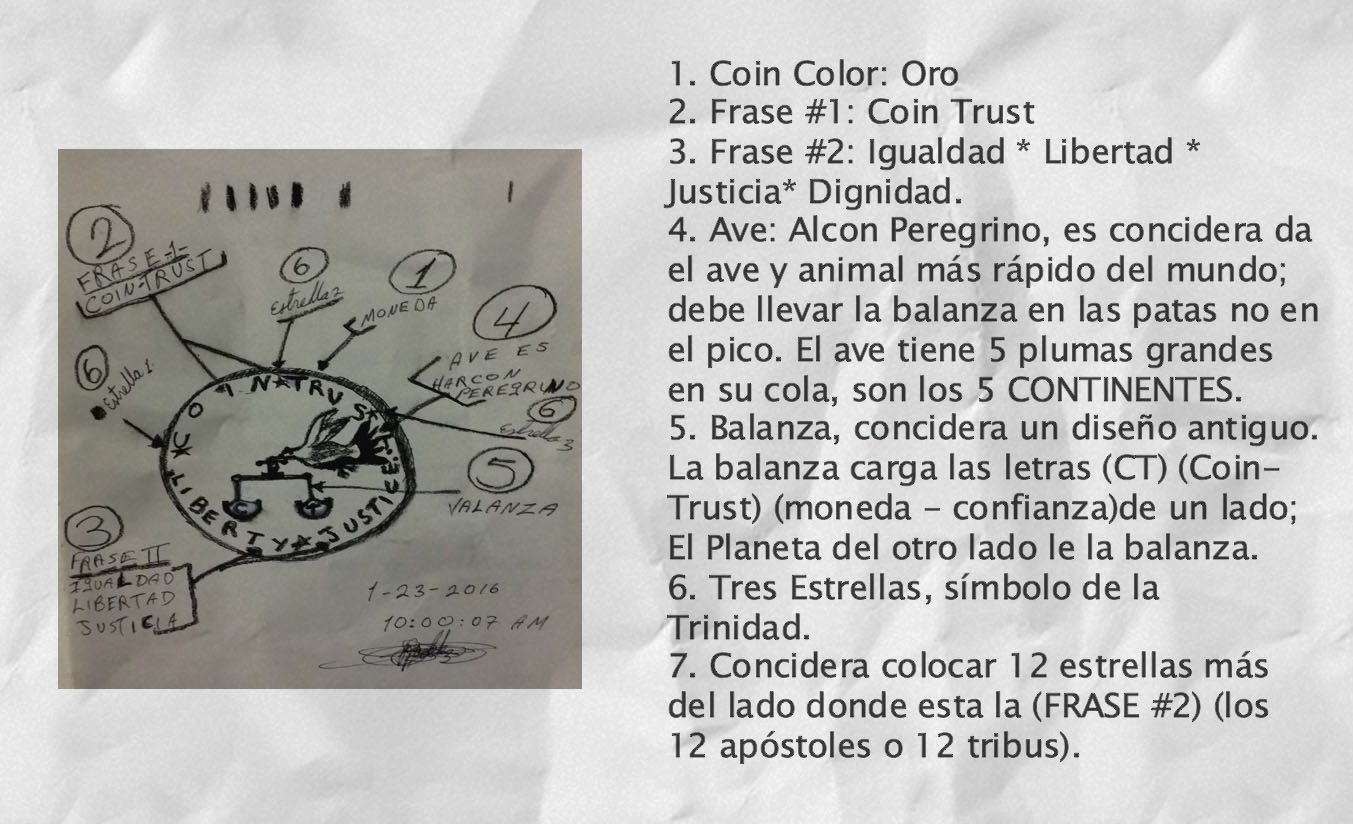 Thanks to the success that we had in the future trading studies, we began an academy that educates thousands of people in future trading and cryptocurrency around the world. In conclusion, the foundation was laid to make the vision on this new cryptocurrency possible, effective and sustainable.

The BitcoinTrust logo was created with a symbolism that transmits the ecosystem´s intention.

After this first stage, by the year 2017 the first global boom in the crypto-world occurred, catapulting Bitcoin from $772.00 to $20,000.00. Thanks to my previous studies on crypto-markets I predicted this event and we capitalized with enough resources to complete this grand vision. With our strategic alliances and now with more capital, the project advanced in the creation of the technological development that would take us to the desired objective.

WHAT IS BITCOIN TRUST?

Is a unified ecosystem based in blockchain technology that makes it possible for a person to take advantage of the attributes of this extraordinary technology and the use of its cryptocurrency in daily life. In few words, it is the cryptocurrency of macro and micro commerce.

BitcoinTrust is the concretization of the reason for the crypto world for humanity. Bitcoin was born to stabilize the financial world because of the failure of banking and governmental administration; caused by an indiscriminate production of inorganic money. Bitcoin´s vision is for the whole world to have access to this technology. Nevertheless, Bitcoin, Ethereum and other cryptocurrency had to be the beta trial of this innovation, and as Beta, they lack the technological attributes that allow for an adequate scalability.

In BitcoinTrust, we study the pros and cons and as we mentioned before, we create a more effective system for a global scalability and give more people an opportunity to participate.

BitcoinTrust Bitcointrust is the evolution and the entry way for all of the commercial areas toward blockchain. 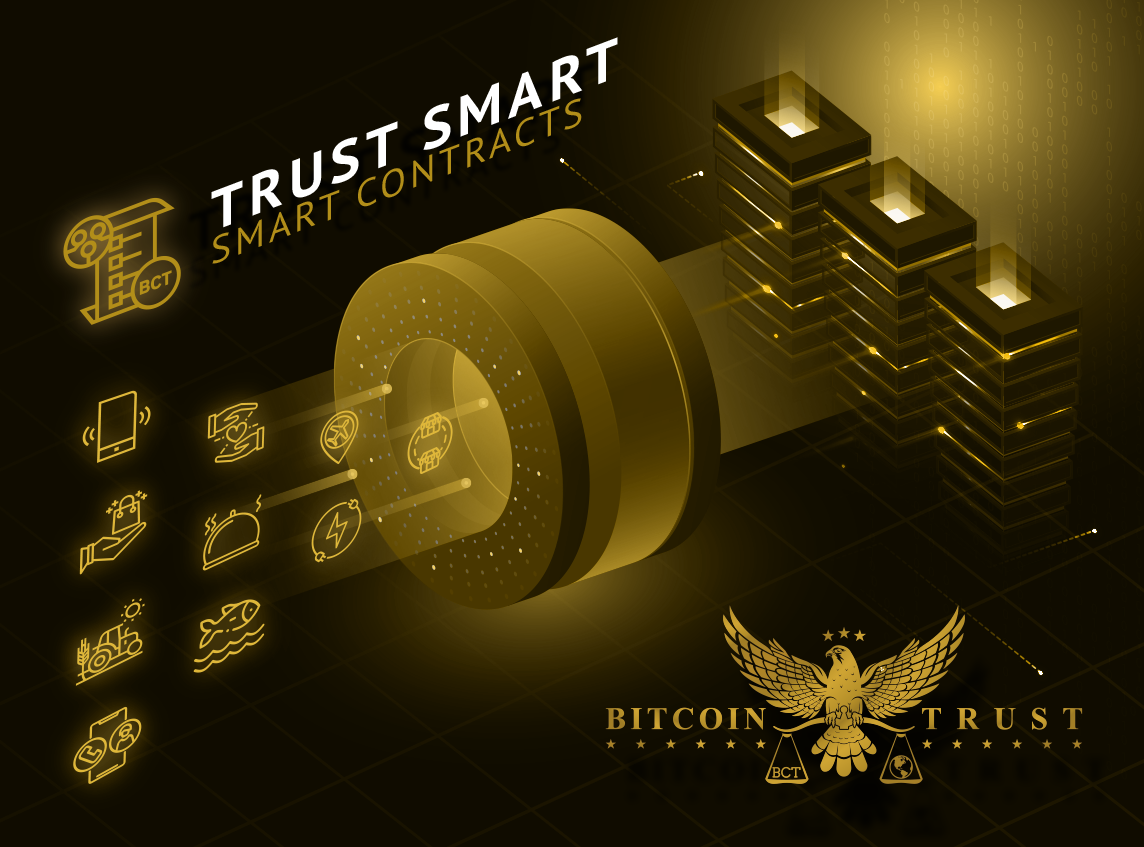 WHAT DO WE SEE IN THE FUTURE?

I would like to show you the necessity that exists and the solution that BitcoinTrust brings to the world through blockchain technology. Imagine tens of thousands of commercial goods and services that exist today in their different categories, for example:

This is just mentioning a few, each of these areas has dozens, hundreds or thousands of different goods. Now I want you to be able to visualize the magnitude ahead. Imagine how many websites there are on the internet, we can say that about 98% of them could and should evolve to blockchain, and BitcoinTrust has created the structure to duplicate and the simplicity to facilitate access to this technology.

WHAT DID WE DO?

(Stake) in your main wallets:

BitcoinTrust bases its mining system on Proof of Stake (PoS). it is a type of incentive; the more coins in your wallet, the more you help the network and the more reward you will have. For example, a person who owns 1000 BCT can put it to mine in their personal computer and earn mining rewards, plus the revalorization of the currency. In summary, just putting your coins in your wallet gives you more earnings and you support the security of the network.

BitcoinTrust has been designed with the planet in mind; it does not generate high consumption thanks to the POS mining, which is eco-conscious. It helps lower the high consumption of electricity of the POW system and the consumerism that Asic equipment, graphic card, etc. generate.

COMMERCIAL AND FINANCIAL ECOSYSTEM THAT SURROUND IT

Let´s talk about the tangible. With some products already created and the continued development of others in a real and usable ecosystem based on blockchain. This allows people to use their BitcoinTrust on all of their basic needs. It is important to highlight that we built a platform that allows computer developers to create smart contracts for all areas of commerce, not only financial ones or ones for the cryptocurrency. It´s also worth noting that we have developed the most complete smart contract for the benefit of agriculture, which we have made available for free to the world.

These are some immediate products:

Smart contract between a farmer and a distributor by way of BitcoinTrust.

Smart contracts for the pisciculture sector with ease of payment through BitcoinTrust.

Equality, liberty, justice and dignity are the base of universal rights. Trusthumanity takes education, food and hope to the most vulnerable populations.

Telecommunication at everyone´s fingertips and accessibility through BitcoinTrust.

With BitcoinTrust you can pay for associated restaurants around the world.

With BitcoinTrust, you can enjoy your vacations, flight reservations, hotels and rent cars around the world.

become a business owner with our franchise system and obtain benefits with biling through BitcoinTrust.

Buy your phone and all types of accessories in the network of telephone stores around the world.

Currently, many companies and people perceive blockchain as inaccessible, it is almost impossible to get professional programmers in this area and they find costs to be too high. This shows an abyss between the people interested and blockchain. In BitcoinTrust we have developed a SmartContract technology and API system that makes it easy for programmers, enthusiasts or learners to create any type of product in BitcoinTrust´s Trustsmart.

BLOCKCHAIN TECHNOLOGY WITH ITS TRUSTSMART CONTRACT.

Smart Contracts based in Blockchain are the future of technology. Just the same way we learned how to use a computer or a smartphone a few years ago or the way it is necessary to use a mask in Coronavirus times, that is how important it is for any developer, company or government to be knowledgeable about Smart Contracts and how to benefit.

What is a Smart Contract? (TrustSmart)

Smart Contracts are programs that can define rules and strict consequences the same way a traditional legal document does. They are unmodifiable and self-executing. For example, BitcoinTrust developed a smart contract for agriculture that allows for the automatization of the whole agricultural process, which give a broad series of benefits to all of the interested parties.
From the evaluation of the land, selection of the seeds, irrigation system installation, use of organic or biochemical fertilizers, harvest and distribution, exportation, etc. Everything is automatized and transparent. All of the parties benefit: the farmer, the seed provider, the irrigation provider, the fertilizer provider, the investor, the exporter, the government and the consumer. Everyone can see the processes day to day with total transparency. This is a transparency that only blockchain and Smart-Contracts provide.
What did we do with BitcoinTrust? We created a platform that allows the creation of any type of smart contract, be it in the financial world, the commercial world or in cryptocurrency. It is so simple that we could use the popular phrase “like microwave popcorn”.

The development team is of vital importance in an ecosystem of this nature. In the creation of this extraordinary ecosystem, experts in different areas such as blockchain technology, traders and market analysts, computer programmers, mathematic experts, financial experts, marketing communicators, informatic architects, lawyers, agricultural engineers and psychologists have participated. A whole team of professionals with diverse knowledge have worked to bring us here.

Today BitcoinTrust has an important growing community which participates on different social media; Telegram being the official channel for primary communication. The majority of interested people join through Facebook and Instagram. You can find the marketing and education videos and tutorials on YouTube

We count on an educational academy called TrustLearning in which people, who have not had experience or knowledge of cryptocurrency before, are educated from an initial level to advanced, by experts completely cost free.
We are making strategic alliances that will catapult BitcoinTrust into one of the 3 most important cryptocurrencies in the crypto world. For example, we created a strategic alliance with Tesora International Bank, a multinational finance entity with offices in Switzerland, London, Barcelona, Italy, USA, and others. This will facilitate commerce for users and governments through the ease of use of BitcoinTrust.

These and other details make BitcoinTrust the cryptocurrency that you should have as primary in your portfolio. Let´s continue together until we see a better world for everyone.

Join or telegram channel to get to know the day to day occurrences. 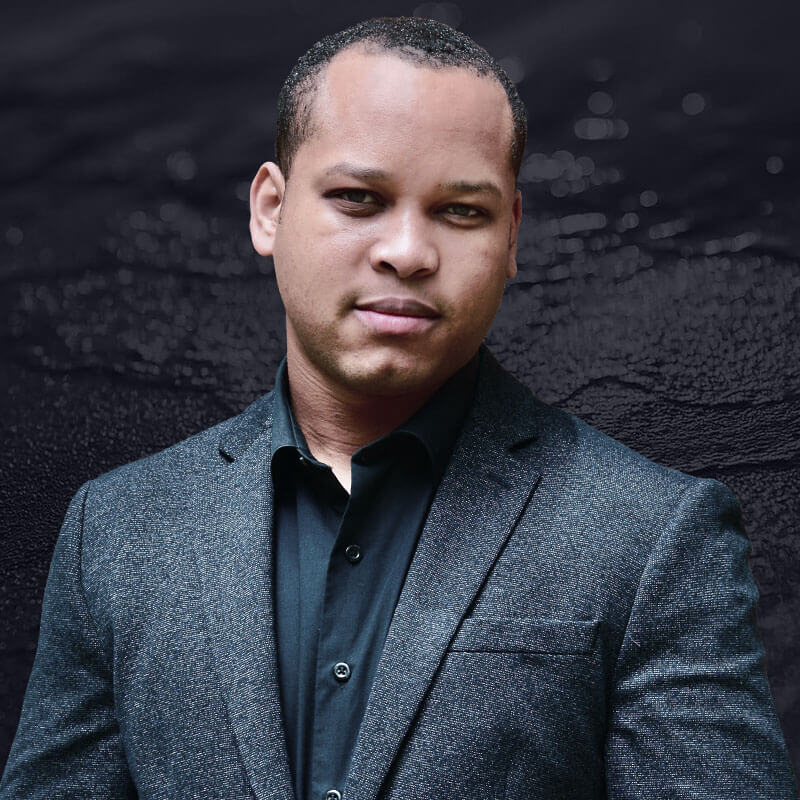 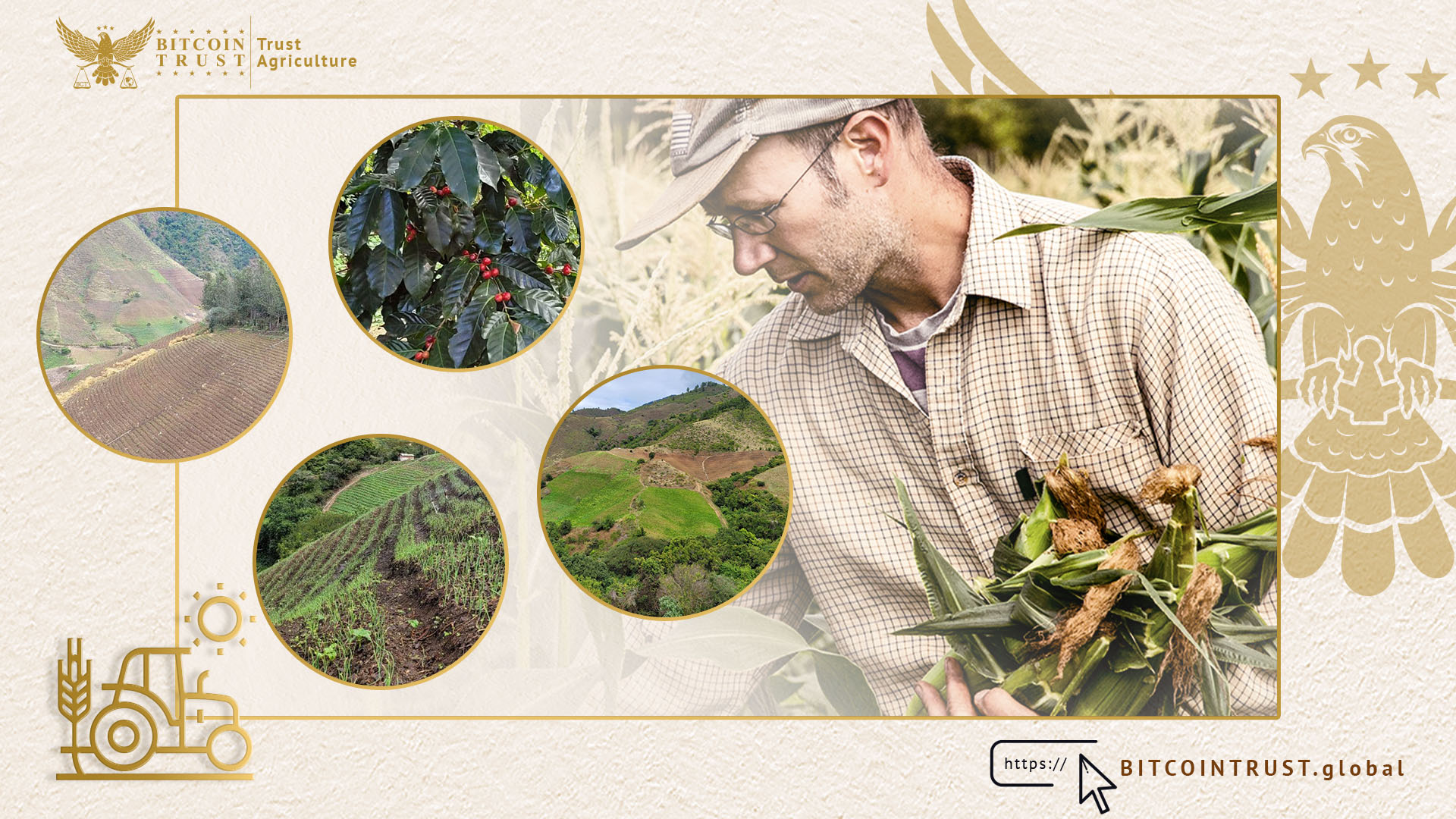